The attacking midfielder at Vipers SC, a Uganda Premier League Side, shocked his largely female fan base when he littered his social media with photos of his madam only identified as Esther Swabale

The cunning Mucu is one of the fast-rising soccer players on the Ugandan and East African scene.

The 27-year old midfielder-cum-forward made a move from the Kasasiiro boys to join Mbarara City FC and was later drafted by Vipers SC, the Venom as a free agent.

The former St. Mary’s Boarding Secondary School student has always been involved in the first team since arriving at the Kitende-based club. 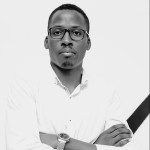