There are conflicting reports over the fate of 17 Ebola patients who vanished after a quarantine centre in the Liberian capital Monrovia was looted.

A senior health official said all of the patients were being moved to another medical facility.

But a reporter said that 17 had escaped while 10 others were taken away by their families.

More than 400 people are known to have died from the virus in Liberia, out of a total of 1,145 deaths recorded by the World Health Organization.

Assistant Health Minister Tolbert Nyenswah said protesters had been unhappy that patients were being brought in from other parts of the capital.

Other reports suggested the protesters had believed Ebola was a hoax and wanted to force the quarantine centre to close.

The attack at the Monrovia centre is seen as a major setback in the struggle to halt the outbreak, says the BBC’s Will Ross, reporting from Lagos.

Health experts say that the key to ending the Ebola outbreak is to stop it spreading in Liberia, where ignorance about the virus is high and many people are reluctant to cooperate with medical staff.

Mr Nyenswah said after the attack that 29 patients at the centre were being relocated and readmitted to an Ebola treatment centre located in the facility of the country’s John F Kennedy Memorial Medical Center.

However, Jina Moore, a journalist for Buzzfeed who is in Monrovia, said that 10 people had been freed by their relatives on Friday night and 17 had escaped during the looting the next day.

Rebecca Wesseh, who witnessed the attack, told the AFP news agency: “They broke down the door and looted the place. The patients have all gone.” 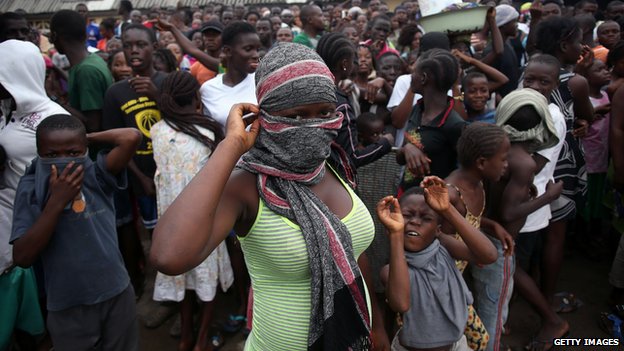 The attackers, mostly young men armed with clubs, shouted insults about President Ellen Johnson Sirleaf and yelled “there’s no Ebola”, she said, adding that nurses had also fled the centre.

The head of the Health Workers Association of Liberia, George Williams, said the unit had housed 29 patients who “had all tested positive for Ebola” and were receiving preliminary treatment.

Confirming that 17 had escaped, he said that only three had been taken by their relatives, the other nine having died four days earlier.

Fallah Boima’s son was admitted to the ward four days ago, and seemed to be doing well, but when the distraught father arrived for his daily visit on Sunday his son was nowhere to be seen, AFP adds.

“I don’t know where he is and I am very confused,” he said. “He has not called me since he left the camp. Now that the nurses have all left, how will I know where my son is?”

Ebola is spread by contact with an infected person’s bodily fluids, such as sweat and blood, and no cure or vaccine is currently available.

Blood-stained mattresses, bedding and medical equipment were taken from the centre, a senior police officer told BBC News, on condition of anonymity

“This is one of the stupidest things I have ever seen in my life,” he said. “All between the houses you could see people fleeing with items looted from the patients.”

The looting spree, he added, could threaten to spread the virus to the whole of the West Point area.

Described as a slum, there are an estimated 50,000 people in the West Point neighbourhood.

The Ebola epidemic began in Guinea in February and has since spread to Liberia, Sierra Leone and Nigeria.

On Friday, the death toll rose to 1,145 after the WHO said 76 new deaths had been reported in the two days to 13 August. There have been 2,127 cases reported in total.