New recommendations on daily aspirin use will likely stir the pot in the ongoing aspirin debate. The U.S. Preventive Services Task Force published a final recommendation statement on Monday saying that taking an aspirin a day might help prevent cardiovascular disease and colon cancer.

The task force found that people ages 50 to 59 who have an increased risk for cardiovascular disease can lower their risk for heart attacks, stroke and colon cancer by taking an aspirin a day. They also found that those ages 60 to 69 can benefit as well, but should discuss the treatment with their health care provider first. They concluded there is not enough evidence to determine the benefits and harms of aspirin use in people younger than 50 or older than 69.
“These new findings from the task force provide a good evidence-based approach for managing a disease with therapy that has risks,” said Dr. Biswajit Kar, medical division chief at the Center for Advanced Heart Failure at Memorial Hermann Heart and Vascular Institute-Texas Medical Center. “Low-dose aspirin therapy has many proven benefits, including preventing heart attacks, strokes, and colorectal cancer.”
This is the first time the task force has issued a recommendation on aspirin to prevent both cardiovascular disease and colon cancer for those age ranges. 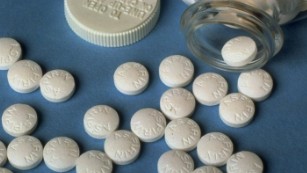 Health effects
“Since our last recommendation in 2009, there has been a significant amount of science that allowed us to make a better recommendation,” said former task force chairman Dr. Michael LeFevre. “What’s new is our recommendation that incorporates reduction of colon cancer. We combined the potential benefits for cancer with the potential benefits for cardiovascular disease. That’s new and I don’t think it is either widely known or certainly not widely incorporated into a decision that balances benefits and harms.”
LeFevre also said that in 2009 there were concerns that men and women were different in terms of their aspirin benefit profile. “With the advance of science, we have decided that is not the case,” he said. “The new recommendation applies to both men and women equally.”
The recommendation applies to people who are not at an increased risk for gastrointestinal bleeding, who have at least a 10-year life expectancy, and who are willing to take low-dose aspirin daily for at least 10 years. It is also based on recent reviews that reaffirmed previous evidence about the benefits of aspirin for prevention of heart attack, stroke and colon cancer.

Two sides to the equation

There has been much back-and-forth on the benefits of daily aspirin use.
A 2015 study in the Annals of Internal Medicine found that people who used a daily low dose of aspirin were less likely to have colon cancer. But another study that same year in the Journal of the American College of Cardiology found that people who were taking aspirin for preventive measures were at an increased risk for serious health problems, such as gastrointestinal bleeding and ulcers. 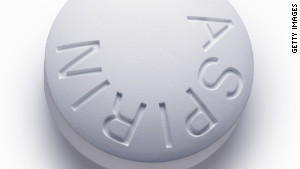 An aspirin a day may not keep the heart doctor away
In this study, there was about a 60% increase in serious gastrointestinal bleeds in people who took aspirin regularly, said LeFevre. But LeFevre said the benefit outweighs the risk.
“The deal with aspirin is we know we can help some people, and we also know we can hurt some people,” he said. “We are moderately certain that the benefits outweigh the harms for men and women ages 50 to 59 who have a 10-year cardiovascular risk of 10% or greater. That is the group we are most confident about.”
He also said men and women ages 60 to 69 with a 10% greater risk of cardiovascular disease will have benefits that outweigh the harms, but only by a small amount. Kar of the Center for Advanced Heart Failure said this study supports a longtime understanding of the importance of balancing the benefits of daily aspirin use with the potential complications.
“We now have good data to back up the importance of identifying patients best suited to receive this treatment and target the patient population that is at highest risk,” said Kar. “These recommendations underscore the need to use aspirin judiciously in our patient population. This guidance gives us the clinical tools we need to recognize which men and women are most susceptible to heart attack and stroke, and most likely to benefit from low-dose aspirin treatment.”
LeFevre agreed; he said patients need to speak with their physicians to find the right balance.
“It’s not as easy as just saying, ‘I need to take an aspirin.’ You have to look at both sides of the equation. If personal risk for bleeding goes up, that erases the net benefit. The good news is that taking low-dose aspirin can help prevent heart attacks and strokes, and if you take it for five to 10 years it can help prevent colorectal cancer. That’s the good news. The bad news is we are also certain taking aspirin on a daily basis increases the risk of bleeds. So it’s important to have a conversation with your physician about what’s right for you,” said LeFevre.
Source: http://edition.cnn.com/

Add
Enable Notifications    OK No thanks
We use cookies to ensure that we give you the best experience on our website. If you continue to use this site we will assume that you are happy with it.Ok