ARUA. A total of 10 Alliance in Motion alias Aim Global staff have been arrested over alleged human trafficking and fraud.

The suspects were on Thursday rounded up by police at Edenz Hotel in Arua town where they were allegedly training people on empowerment before defrauding them of millions of shillings. 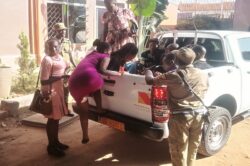 The arrest was ordered by Alice Akello, the Arua resident city commissioner after several complaints from the victims within and outside the West Nile region.

“We got complaints from a number of young girls and boys that were brought from Lamwo, Agago, Kitgum, Lira, Nwoya and from other parts of the country. They came here telling us that they are stranded, they have nowhere to go, they don’t have what to eat and that they were brought here by Aim Global,” Akello said.

“The Alliance Global people told the victims that they were coming for jobs so, when they reached here after their parents paid shs1m, of which the company staff claim shs700,000 was for buying a computer, shs200,000 for suits and shs100,000 for Identification card. Again, on top of shs1m, they were asked to pay shs300,000 for rent so, when they got here, they put them three in one small room or five,” Akello explained.

She said in the process, the victims were not given proper food but kept on moving around with magical Saudi Arabian Coffee and Philippino non therapeutic food supplements with curative properties for every disease known to mankind.

“You don’t know what client you are going to sell to, you don’t know who to buy. These are people who were picked from elsewhere, they don’t speak Lugbara, they don’t know any language here but they speak a bit of English. The parents either sold animals, household property or food stuff to get this shs1m for them to come. Then these children came here and got stranded,” Alice remarked.

She said some of the ladies resorted to sex work to earn a living, a reason they took action to arrest the company staff who will soon appear in court over human trafficking and fraud.

Babra Faith Alu, 20, a resident of Lira and one of the victims said the Aim Global staff called her and promised for her a wonderful project of national empowerment.

She said they told her that the entry requirement was sh1m which would be used for buying for her a laptop computer and a pair of suits for her smartness.

“They told me to lie to my mummy in order for her to pay the money. I was told not to disclose the name of the company and the nature of the project,” Alu said.

After three days, her mother sent the sh1m after borrowing a loan that she expected the daughter to pay from her anticipated earnings.

But two months down the road, there was nothing tangible, leaving Alu to continue surviving on mangoes whose season’s end is fast approaching.

DIPLOMATIC TIES: Speaker Among Lauds Cuba For Support To Uganda