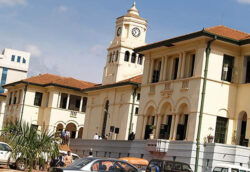 Lawmakers on Parliament’s Committee of Human Rights have grilled officials from Judiciary on the increasing case backlog, saying the slow disposal of cases have left many suspects languishing in prisons without accessing their rights.

Led by Secretary to Judiciary Pius Bigirimana, and Chief Registrar Sarah Langa Siu, the officials had been summoned to respond to responses highlighted in the Annual report by the Uganda Human Rights Commission.

In the report, the Commission decried the long periods suspects stay on remand, which is in total violations of their rights, a finding Tarsis Rwaburindore (Ibanda Municipality) said has worsened congestion in prisons and further worsened by the inhumane of suspects who are made to walk long distances for their court sessions and in the end, they are further remanded to jail.

“Leave alone the congestion, prisoners in my constituency are made to walk 6-7 miles handcuffed. Surely they are human beings. The congestion, why don’t they get released on bail because they are innocent until proven guilty,” he said.

During the meeting, the Chief Registrar revealed that as at June 2022, the Judiciary was stuck with 50,908 in case backlog and out of 164,643 cases filed.

Milton Muwuma (Kigulu South) wondered why the Judiciary hasn’t popularised community service for petty offenders so as to decongest the prisons across the country and attempts to resolve the congestion has been hampered by the counter accusations and blame game amongst the key players.

“One of the challenges that the prison service is grappling with is congestion in the prisons. And we are looking at having petty offenders being reduced in prisons through community service. We haven’t done much in popularizing community service, but the issue of suspects being in cells for 2-3 years without appearing before court or after being committed on remand, they are abandoned. When you reach out to prison management, they say that until the case is called, we can’t do much,” Muwuma explained.

Mityana Municipality’s Francis Zaake tasked the Judiciary to explain why they are still holding onto political prisoners arrested during the campaign period, yet many haven’t been produced in courts to understand their fate.

“During campaigns and after campaigns, hundreds of young people were arrested and they are still in prisons and they haven’t been heard up to this time. Some of them have been there for 2 years, they have never gotten justice, they have never been taken to any court. Some of them who are getting out tell us they are getting out of prison without even going through the court system. And that is weird because the court has failed to do its part,” said Zake.

However the Secretary to Judiciary, Bigirimana lectured the Committee on the mandate of the Judiciary, citing Article 126 that stipulates the mandate of the judiciary, saying the institution is charged with adjudication and not investigation of the matter, which most times explains delay in the execution of justice.

The Chief Registrar informed the Committee that the congestion in prisons was further worsened by the Covid pandemic that saw the prisons’ authorities move suspects around which affected attendance of suspects for their trial, but a circular has been issued to handle cases of suspects arrested for violating covid guidelines to so to decongest the jails.

District bosses clash over a car